DON’T ASK ME WHAT I AM MIXED WITH! 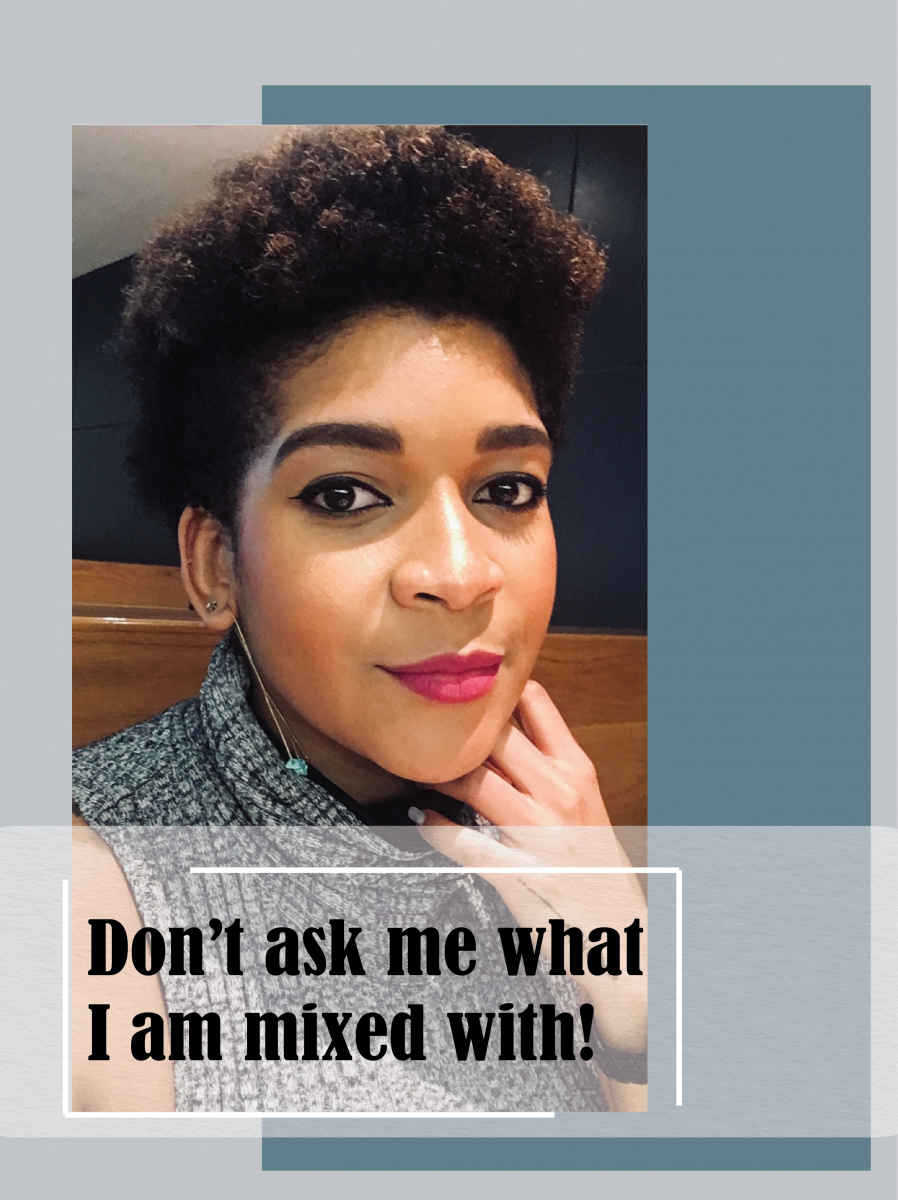 “What are you mixed with?”, the 1st time I was asked that question I was 16, I just arrived from Trinidad and started school in the U.K. to complete my A ‘levels. I was genuinely confused by the question.. “I’m from Trinidad” I responded, “no we know where you’re from we want to know what you’re mixed with?”. I have never once questioned what I was mixed with, I am a Trini it’s not a question I’ve ever had to answer, it’s not even something I thought about. So I then stated –‘I’m Black’ (obviously right I might be red but let’s be honest I am black). “You’re not that black”.

Over the years I have heard that phrase numerous times, ‘you’re not that black’, sometimes from white people as a compliment, I’ve learnt to understand they say this to sometimes feel better about something racist they may want to say in front of me, or to somehow make me feel like ‘one of them’. Don’t get me wrong, I have also heard this term ‘you’re not that black’ from other black people to somehow discredit my heritage.

“But you speak so eloquently”, I was told this once working as a part-time receptionist in my late teens by a British woman who honestly couldn’t comprehend my Caribbean education. Naturally this was AFTER I was asked ‘Where are you from’.

Speaking of the workplace, let’s reference dating while black. I was once asked by the member of the opposite sex when he saw me rock my natural hair (which was previously in braids) to a date “do you wear your hair like that to work?”. I was stunned, I was shocked even, what do you mean I have gorgeous healthy hair, is he serious? I said very proudly ‘YES I DO’… We don’t speak of him anymore, needless to say, he didn’t make the cut!

In the work place I have been told, “don’t be so dramatic”, or even asked before heading into a meeting “try to fix your facial expressions” and “try to curb your attitude”. Over the years I’ve learnt to smile and nod (similar to what we learnt from ‘Madagascar ’- “just smile and wave boys”). I have even stifled my opinion sometimes both in a university lecture and at the office but I have never ONCE ‘fixed my face’ my ancestors wouldn’t allow me to wear that mask, my face betrayed me every…time…and that betrayal worked well for me as my face was always the reason I was asked a question in a meeting or told to give an opinion in class. I never left a meeting without being vocal I decided from an early age I am going to be heard. I don’t care if you don’t want to hear what I have to say.

But this steadfast attitude has backfired on me, as I was then told quite boldly in an exit interview at a previous job, when I complained about the bullying nature of the company by superiors, “you don’t strike me as a person who wouldn’t stand up for themselves, you should have said something”. HA! Excellent! Damnit I ‘should have’…amongst all the things I deal with on a day to day I also needed to include being the voice of anti-bullying in my department; great another thing to add to my list!

I’ve been trying to wrap my head around why we’re so angry about George Floyd and why his death in the USA and the death of Belly Mujinga here in the U.K has made us more passionate than usual. It’s because even during a global pandemic that we know is hitting the B.A.M.E community the hardest, we’re still facing a war against racism. We still aren’t safe, we’ve been asked to #stayhome and #stayalert, look out for your neighbour and #bekind. Yet for George Floyd when the city of Minneapolis reopened tried to go about business as usual, was accused of using a fraudulent bank note and is now dead. Or Belly Mujinga a key worker who was doing her job, was spat on, disrespected, and is now dead.

We’re not just angry, WE ARE TIRED! It’s absolutely exhausting to know that even during a global crisis, black lives are still disregarded. “You’re so strong” just another phrase I hear all the time, as if it means we need to continue taking the weight of their knees on our necks! We’re being spat on and disrespected daily. Enough is enough. The next time someone asks me “What are you mixed with?” I shall say it more loudly than ever “I am Black, mixed with slavery”. Don’t ask me what I am mixed with!

This website uses cookies to improve your experience while you navigate through the website. Out of these cookies, the cookies that are categorized as necessary are stored on your browser as they are essential for the working of basic functionalities of the website. We also use third-party cookies that help us analyze and understand how you use this website. These cookies will be stored in your browser only with your consent. You also have the option to opt-out of these cookies. But opting out of some of these cookies may have an effect on your browsing experience.
Necessary Always Enabled
Necessary cookies are absolutely essential for the website to function properly. This category only includes cookies that ensures basic functionalities and security features of the website. These cookies do not store any personal information.
Non-necessary
Any cookies that may not be particularly necessary for the website to function and is used specifically to collect user personal data via analytics, ads, other embedded contents are termed as non-necessary cookies. It is mandatory to procure user consent prior to running these cookies on your website.
SAVE & ACCEPT